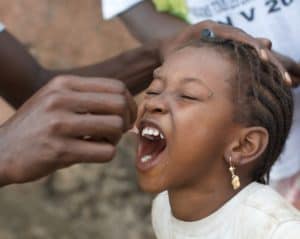 37 children have fallen ill with polio this year. For years polio had been eliminated from the country and west africa however it has come back. The first cases were in Guinée Forestière which borders Sierra Leone, Liberia and Cote d’Ivoire, they have moved across the country as yet there are no cases in Conakry.
To stop the disease a series of campaigns were done by UNICEF WHO and the government however they were not as successful as hoped for and so a fifth campaign was done from the 12th to 15th december. Because the polio vaccine is easy to apply, a couple of drops in the mouth, the campaign is done from door to door over the weekends as this is the best way to cover the maximum amount of 0 to 5 year olds.
I followed a vaccination team round a neighbourhood of fishermen in Conakry. In general people accepted the vaccination, but because there have been so many vaccination campaigns in the last weeks against polio and measles, some were confused and refused as they thought their children had already been vaccinated.