They always keep a bag packed. They seldom have more than twenty-four hours' notice before they are dispatched. The phone calls that tell them to head to the airport, sometimes in the middle of the night, may give them no more information than the country they are traveling to and the epidemic they will tackle when they get there.

The universal human instinct is to run from an outbreak of disease. These doctors run toward it.

They are the disease detective corps of the U.S. Centers for Disease Control and Prevention, the federal agency that tracks and tries to prevent disease outbreaks and bioterrorist attacks around the world. They are formally called the Epidemic Intelligence Service — a group founded more than fifty years ago out of fear that the Korean War might bring the use of biological weapons — and, like intelligence operatives in the traditional sense, they perform their work largely in anonymity. They are not household names, but over the years they were first to confront the outbreaks that became known as hantavirus, Ebola virus, and AIDS. Now they hunt down the deadly threats that dominate our headlines: West Nile virus, anthrax, and SARS.

In this riveting narrative, Maryn McKenna — the only journalist ever given full access to the EIS in its fifty-three-year history — follows the first class of disease detectives to come to the CDC after September 11, the first to confront not just naturally occurring outbreaks but the man-made threat of bioterrorism. They are talented researchers — many with young families—who trade two years of low pay and extremely long hours for the chance to be part of the group that has helped eradicate smallpox, push back polio, and solve the first major outbreaks of Legionnaires' disease, toxic shock syndrome, and E. coli O157.

Urgent, exhilarating, and compelling, Beating Back the Devil goes with the EIS as they try to stop epidemics—before the epidemics stop us. 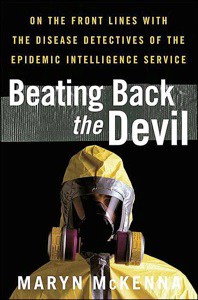 Praise and Reviews of Beating Back the Devil

"Rare will be the reader who does not finish this book without a sense of gratitude for the men and women who serve as the first line of defense between us and the most horrible infections imaginable."

"The book is more than a look into a mostly unknown group of physicians, scientists and public-health officers. It also delves into what kind of people get involved in such an enterprise, lending humanity to a story grounded in science. Can a television show based on their work be far behind?"

"In the war on terrorism, not all of the front lines are visible or the soldiers well-known. ... McKenna ... offers here the first full-blown account of the EIS and its under-reported history and work. She ventures into the agency's labs and conference rooms, describes the science behind battling such diseases as West Nile virus and points out the weaknesses of the nation's public health infrastructure."

"The Epidemic Intelligence Service (EIS) sends its troops stealthily into society's underground or visibly into some of the most dangerous settings on Earth. And, thanks to McKenna, readers come along, sharing the fears, the adventures, the triumphs and the disappointments."

"If you thrive on danger, stress, unpredictability, and near-certain exposure to the planet’s most virulent bio-toxins, consider a career as an epidemiologist in the Centers for Disease Control’s Epidemic Intelligence Service (EIS). That is one message a reader might take home after perusing Maryn McKenna’s unsettling and immensely readable book."

"Even people who think they know about the CDC and its elite corps of physicians, the Epidemic Intelligence Service, will be surprised by Beating Back the Devil, a rare inside account of how EIS works in an age of terrorist threat. McKenna hopscotches the globe, from a malaria outbreak in Malawi to SARS in Vietnam, to bring to life some of the most compelling mysteries confronted by these fearless disease detectives."

"Maryn McKenna paints a vivid portrait of these young researchers and their tense, often exhausting lives … By devoting each chapter to one disease and one scientist, she emphasises the drama of their assignments. Her reports from Malawi and Vietnam are especially good."

"Among candidates for world's worst job, disease detective ranks pretty high. In Beating Back the Devil, Maryn McKenna examines the everyday fascinations and horrors faced by the CDC's Epidemic Intelligence Service….McKenna's research is painstakingly meticulous, and the doctors she profiles come across as brave firefighters of microbiological conflagrations. Not since Sherwin Nuland has an author so effectively revealed the dramatic side of medicine."

Marilyn W. Thompson, author of The Killer Strain: Anthrax and a Government Exposed

"In her enthralling first book, Maryn McKenna takes us inside the unexplored world of the Epidemic Intelligence Service, a vital but rarely discussed part of our national public health service. Without McKenna's thorough research and lively narrative, who would have known of the crusading role the EIS has played since the 1950s in solving our most perplexing medical mysteries? In a new world of bioterror threats and harrowing viruses, McKenna's book is a must-read for anyone concerned about the daunting medical challenges of the future."

"For anyone interested in public health --- that vast and fascinating intersection of science, art and "shoe leather" --- McKenna's book is a satisfying read. It's comforting to know that the EIS exists and that it's on our side."

"They are medicine's rapid-reaction force, an elite cadre of highly trained disease detectives who are poised to go anywhere on a few hours' notice to investigate a threat to public health. As science journalist Maryn McKenna makes clear in Beating Back the Devil -- her deeply researched portrait of the class of 2002 of the Epidemic Intelligence Service, part of the Centers for Disease Control and Prevention -- their work is by turns terrifying, exhilarating, gritty and exhausting. ... A revealing glimpse into the little-known world of deeply committed investigators who trade two years of their lives to be on the front lines of public health."

Howard Markel,M.D., Ph.D., author of When Germs Travel: Six Major Epidemics That Have Invaded America Since 1900 and the Fears They Have Unleashed

"In the tradition of Laurie Garrett and Richard Preston, medical journalist Maryn McKenna tells the fascinating story of some of the most intrepid medical detectives at work today: the Centers for Disease Control's Epidemic Intelligence Service. Beating Back the Devil is both an accessible and detailed account of how these microbe hunters survey, contain, and combat deadly germs in the 21st century. It's also a great read."

"Given unique access to the EIS, McKenna presents 11 case studies of epidemics, environmental threats and acts of terrorism EIS has dealt with... McKenna's personal portraits of these dedicated health professionals illuminate the bravery as well as the anxiety that accompany this demanding work."

"Through this compelling book, readers not only re-live the events that made or are still making history, they also find the human backstories. There, unheralded heroes overcome physical, emotional and political obstacles to prevent news from happening. People do not die. Disease does not spread. Byline-hungry reporters disappear, leaving the truly important stories to be told later by those journalists, like Ms. McKenna, perceptive enough to see the larger picture and patient enough to wait for it to come into focus."

"The men and women of the Epidemic Intelligence Service epitomize public service at its finest. McKenna paints a compelling portrait of their fearless sacrifice and unfailing commitment to protecting our nation against the terror of bioweapons and other public health threats. This book will surely inspire the scientists and biologists of tomorrow to answer their nation's call to serve."

Patricia Thomas, author of Big Shot: Passion Politics, and the Struggle for an AIDS Vaccine

"Maryn McKenna was so close to the first group of E.I.S. officers trained after 9/11 that she could practically smell the adrenaline rush they got from being on call in case bioterrorism or a deadly disease struck anywhere on the globe. In McKenna's hands, outbreak investigations read as richly textured mysteries worthy of P.D. James."