SUPERBUG: The Fatal Menace of MRSA

Lurking in our homes, hospitals, schools, and farms is a terrifying pathogen that has been evolving faster than the medical community can track it or drug developers can create antibiotics to quell it. The pathogen is MRSA — methicillin-resistant Staphylococcus aureus — and SUPERBUG is the first book to tell its intricate, threatening story in full.

Doctors long thought that MRSA was confined to healthcare institutions, infecting almost exclusively those who were already ill, immune-compromised or old, and flaring up only occasionally in the outside world. But through remarkable reporting that covers 50 years of medicine, microbiology and tragedy, acclaimed science journalist Maryn McKenna reveals the hidden history of MRSA’s relentless advance across the planet: overwhelming hospitals, tearing open families, infiltrating agriculture and moving inexorably into the food chain.

Drawing on hundreds of interviews and more than 1,000 scientific publications dating back to the 1950s, McKenna traces the resistant bug’s stealthy path through the decades, from an accident victim in a British hospital to a cluster of healthy children made desperately ill in the American Midwest and to a stubborn case of bacterial carriage in a Dutch farmer’s child that reveals a chain of transmission stretching across borders, species and oceans.

With the sensitivity of a novelist and the skill of a disease detective, she portrays the emotional and financial devastation endured over years by victims of hospital MRSA, and the shock and grief of parents whose healthy children were felled in hours by an undetected community strain. She takes readers into medical centers where frustrated physicians are forced to discard drug after drug, and into labs where researchers struggle for the molecular secrets that will allow new drugs to work — for a while. She uncovers the unheard warnings that predicted the current crisis, and she indicts the social and political neglect that allowed it to occur: misplaced government spending, inadequate public health surveillance, misguided agricultural practices and vast overuse of the few precious drugs we have left. And in the very newest research findings, she uncovers some hope, some tools for self-defense — and almost no margin for error.

In SUPERBUG, McKenna demonstrates that MRSA is not one patient’s misfortune or one family’s tragedy. It is a global emergency of successive epidemics in hospitals, communities, and farms, and successive failures in governments, medicine and the marketplace. It touches almost every aspect of modern life. It is, as one weary researcher tells her, “the biggest thing since AIDS.” 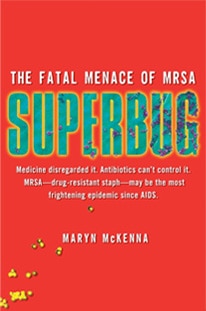 Praise and Reviews of Superbug

“A well described and documented narrative of an important emerging infectious disease which goes behind the tabloid headlines to show the tragedy and toll of a frightening illness and a public health challenge.”

Howard Gleckman, Caring for our Parents

Part detective story, part expose, part careful explanation of the science of bacteria, Superbug is a frightening account of how this highly aggressive form of staph has spread from being a largely hospital-acquired infection to a widespread commmunity epidemic… If you operate a nursing home, assisted living facility, or home health agency, or are a family member whose loved ones need care, read this book.”

“Like a modern-day Rachel Carson, Maryn McKenna sounds a powerful alarm about the insurgency of a deadly infection lurking in our schools, our gyms and even our food.  Antibiotics are losing their life-saving powers because of our injudicious use that has helped spawn these increasingly invincible pathogens.  By connecting the dots, Superbug may give us the early warning we need to prevent an uncontrollable epidemic.”

“Maryn McKenna’s compelling history proves that antibiotic resistance is a global concern. The story of drug-resistant staph actually begins in the United Kingdom in the 1940s, with the introduction of penicillin. It continues to this day, as staphylococcus continue to develop resistance to new antibiotics as soon as they are introduced, not only in the United States but everywhere where antibiotics are used – and misused – in today’s globalized world.”

“If you want the short version, Superbug: The Fatal Menace of MRSA is a must read.”

“Maryn McKenna’s Superbug provides a heart-rending and enlightening portrait of the spread of methicillin-resistant Staphylococcus aureus (MRSA). Commonly imagined to be a disease that only affects elderly hospital patients, McKenna’s book shows that no area of the United States is untouched. Thirty percent of high school athletic programs in one survey reported MRSA. In another study, 80 percent of farms and 40 percent of pigs had MRSA. The consequences are horrific. In 2005, 94,360 invasive MRSA infections occurred in the United States, with almost 19,000 deaths.

“In the United States, the response to MRSA has been largely uncoordinated, and left to individual institutions, schools, and health care centers. American hospitals have tried a range of responses. Some hospitals have tied executive pay to staff hand-washing rates; others isolate patients with MRSA. Nationwide educational campaigns reduced antibiotic prescription rates temporarily, only to see them rise again. The pipeline for new antibiotics dried up due to economic disincentives for drug companies to invest in short-course medications like antibiotics. The medical system has not yet been able to contain antibiotic resistant pathogens like MRSA.

“The problem is just as dire on American farms. Limited action has been taken to reduce misuse of antibiotics in agriculture. While the FDA did ban agricultural usage of the powerful antibiotic fluoroquinalone, farms still regularly use powerful antibiotics as ‘growth promoters’ in daily feed for animals. This year, I introduced legislation, HR 1549, the Preservation of Antibiotics for Medical Treatment Act, which would take additional steps to protect seven medically-critical classes of antibiotics for human usage against MRSA and other antibiotic resistant pathogens. Maryn McKenna’s book is a powerful call to action.”

“Scientifically dense, richly reported and full of heartbreaking stories of victims and their families, Superbug is not an easy read, but it is a compelling one.”

“An alarming book, and rightly so… McKenna has a knack for taking what could be a complicated subject and making it accessible to lay readers. As well, she writes with the flair of a novelist, making the pages just fly by as you are drawn deeper and deeper into this real life medical thriller. Complete with detailed end-notes, this book is a must-read not only for policy makers, health care professionals, teachers, prison officials, and anybody else who might come into contact, on an official basis with MRSA, but it is also a must-read for every concerned citizen who is interested in taking a proactive role in their own health care and safety.”

“A gripping account of one of the most devastating infectious agents on the planet… A meticulously researched, frightening report on a deadly pathogen.”

“Superbug is essential for anyone going to the hospital or working in healthcare. Too often even top doctors dismiss the threat, saying ‘the germs are everywhere.’ Patients and medical professionals should read this book and take its lessons seriously.”

“Noticeably well-written… I recommend this book for pharmacy faculty members and students. It is a terrific book to use as a reference for infectious disease background reading… Useful for health policy considerations, and for understanding the global effects of unrestrained and inappropriate use of antibiotics in clinical and agricultural contexts.”

“An excellent summary of the journey of S. aureus from just another bacterium universally covered by penicillin to a wily pathogen that changes its DNA almost as fast as new antibiotics are developed.”

Howard Markel, M.D., Ph.D., George E. Wantz Distinguished Professor of the History of Medicine, The University of Michigan; author of When Germs Travel

“Maryn McKenna tracks the harrowing biography of MRSA with all the skills of a first-rate investigative journalist. Superbug reads like a thriller and is presented in a nuanced and eloquent prose that is as infectious as the microbe it details.”

“A readable, well-referenced, detailed and enjoyable book… Superbug: The Fatal Menace of MRSA is painstakingly researched and credit should go to Maryn McKenna for presenting some of the issues surrounding the emergence of community-associated MRSA in a way that is readily accessible to the general public.”

“Superbug: The Fatal Menace of MRSA scared the hell out of me… The facts and cases Maryn McKenna presents in Superbug speak for themselves, and we need to take MRSA seriously.”

“Maryn McKenna offers an intense and critical look into the frightening, and ongoing, evolution of drug-resistant Staphylococcus aureus (MRSA)… Superbug sounds an alarm to bring wide recognition of the severity of the problem and prompt the required action from governments, healthcare facilities, prescription drug makers, and individuals at home, all of which McKenna lays out in a clear and persuasive style.”

“Where will the next major epidemic come from? According to Superbug, that epidemic is already here. It grew out of our hospitals, our prisons and our high-school locker rooms. We fed it with our demand for antibiotic ointments, prescriptions we didn’t need and factory-farmed cows packed together and pumped full of their own antibiotics. We spread it with unwashed hands. The story of MRSA is more prosaic than tales of tracking Ebola through the African jungle, but that’s exactly what makes it terrifying, and fascinating.”

Marion Nestle, Professor of nutrition, food studies, and public health at New York University, and author of Safe Food: The Politics of Food Safety and Feed Your Pet Right

“As compelling as a detective novel, Superbug tells the stories of the victims of MRSA to explain how this pathogen evolved into so serious a threat to human health and medical practice. The book reveals the inextricable links between human and animal health and the disastrous consequences for human health of using antibiotics to promote the growth of farm animals. McKenna has written a devastating critique of current systems of animal agriculture, health care, and drug development, as well as the politics of research. The solution to MRSA, she says, is a vaccine. But where is the political will to pay for it?”

“With its ominous title and front-cover description (‘Medicine disregarded it … Antibiotics can’t control it …’), Maryn McKenna’s Superbug is packaged as a bio-thriller. In this literary subgenre, encompassing both fiction (The Andromeda Strain) and nonfiction (The Hot Zone, as well as the book under review), the security and predictability of modern civilization are suddenly shattered by the outbreak of an enigmatic infectious disease. We see the terrible truth that our way of life is fragile and tenuous, subject to wild, dark forces. The stories’ heroes—usually doctors and scientists—strive to make sense of the plague and turn back the tide of entropy. At the end of these tales, when order has been restored, we feel a rush from our brush with danger and relief that the chaos has been calmed. But instead of providing the consolation of a happy ending, Superbug warns that the worst is yet to come.”

Paul Offit, MD, Chief of Infectious Diseases, The Children’s Hospital of Philadelphia and Maurice R. Hilleman Professor of Vaccinology and Professor of Pediatrics, University of Pennsylvania School of Medicine and author of Autism’s False Prophets: Bad Science, Risky Medicine and the Search for a Cure

“Through powerful storytelling, Maryn McKenna has given voice to people who have suffered at the hands of a fast-changing health threat. Superbug reminds us all that, in an age of global epidemics, our vigilance must be global, too.”

“Lays bare, often all too graphically, the ravages of a disease with the potential to do grievous international harm.”