Antibiotics in chickens and links to human infections 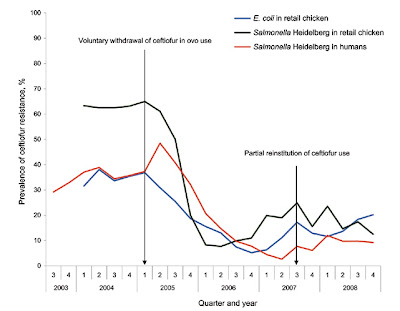 From the January issue of Emerging Infectious Diseases, published by the CDC (and therefore free. Must I keep urging you to read it? Go, already), here’s a roundup of bad news about bad bugs.

In Canada, researchers from that country’s Public Health Agency have found a “strong correlation” between the use of ceftiofur, a third-generation cephalosporin, in chickens; the rates of a resistant strain of Salmonella in chickens; and the appearance of that same strain in humans. The strain is Salmonella enterica serovar Heidelberg, one of the most common salmonella strains in North America, and one which can be nasty: It may cause mild illness, but also causes septicemia and myocarditis and can kill. Quebec created an unplanned natural experiment: Hatcheries there were broadly using ceftiofur until 2004, backed off from its use in 2005 and 2006, and then began using it again in 2007 in response to a growing problem with a particular infection. When the drug was withdrawn, resistant infections in birds and humans plunged; when it was reintroduced, they rose again. (Look at the black and red lines in the graph above left.)

Meanwhile, broiler chickens in Iceland are passing fluoroquinolone-resistant E. coli to humans there. Researchers at the University of Iceland were puzzled by an earlier finding that bacteria resistant to fluoroquinolones (a family that includes the human drug Cipro) were increasing among chickens raised in Iceland, despite strict controls on antibiotic use in food animals and stringent disinfection in chicken batteries after cohorts of birds were sold for slaughter and removed. They have two findings: The source of the resistant bacteria in the birds appears to be feed contaminated with resistant E. coli; and resistant bacteria in Iceland residents are microbiologically indistinguishable from those in the birds. Because E. coli is a very diverse organism, the very close resemblance between the isolates from chickens and the isolates from humans pins chickens as the likely source.

And just to make clear we’re not blaming every microbiological evil on farming: Seagulls in Portugal have been found carrying multi-drug resistant E. coli in their feces. The public health concern here is obvious: Just think back to the last time you were at a beach, or anywhere else seagulls frequent, and envision a seagull perch — and the masses of seagull droppings streaking it. Now imagine those droppings transmitting antibiotic-resistant E. coli into the surrounding environment: the boardwalk, the beach, the towels… Additional problem: Seagulls are migratory birds, so the resistant bacteria easily cross borders and oceans.