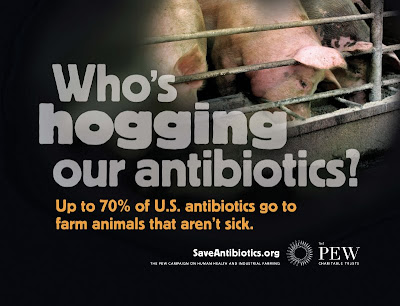 I was gobsmacked to discover today, a few days late, that the Pew Campaign on Human Health and Industrial Farming (authors of the report discussed here) have launched a marvelously in-your-face series of ads in Washington DC, aimed at bringing the issue of antibiotic use in farm animals to people who might not think about it.

The ads have been placed in the Capitol South and Union Station Metro stops, which are the stops that bracket Capitol Hill, and in Metro cars on the red and blue/orange line trains, which are the main commuter trains down to the Hill. In other words, they’ve been made to be the morning reading of the people most engaged in the health reform debate right now — and if you think those folks are not thinking about healthcare spending and the growth of antibiotic resistance, well, umm, oh never mind.

The American Medical Association, the American Academy of Pediatrics and other leading medical groups agree that the growth of bacterial infections resistant to antibiotic treatment is a looming public health challenge. The groups also agree the misuse of antibiotics on industrial animal farms plays a significant role in this crisis. While antibiotics are prescribed to people for short-term disease treatment, these same critically important drugs—like tetracycline, erythromycin and ciproflaxin—are fed in low doses to large herds or flocks daily, often for the lifespan of the animal. This creates ideal conditions for the breeding of new and dangerous antibiotic-resistant bacteria.

For statistics and arguments, along with more images — cows! chickens! pills! — go to the site of the commission’s campaign, Save Antibiotics.