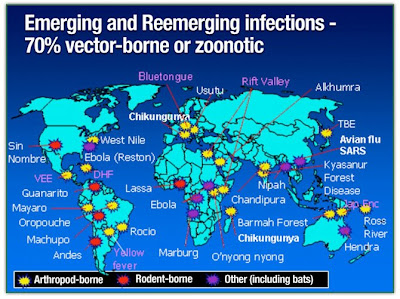 Constant readers, you probably know that yesterday the World Health Organization declared the first flu pandemic in 41 years. I want to point out for you a side issue in the H1N1 story that has great relevance for MRSA, especially ST398.

As described in this article I wrote last night for CIDRAP, three medical journal articles have now pointed out that the virus, or its major components, could have been recognized in swine months to years ago. We missed it, though, because there is so little regular surveillance in pigs for diseases of potential importance to humans. As the authors of the most recent article, in Nature, said yesterday: “Despite widespread influenza surveillance in humans, the lack of systematic swine surveillance allowed for the undetected persistence and evolution of this potentially pandemic strain for many years.”

This is important for our purposes because we know that we are in the same situation with MRSA ST398: The strain was first spotted in France, and has been a particular research project in the Netherlands, but has been found pretty much wherever researchers have looked for it, throughout the European Union, in Canada, and most recently in the United States. All told, though, the scientists concerned with it are still a small community; there is no broad surveillance looking for this bug.

And that’s a problem, for MRSA, for influenza, and for any number of other potentially zonotic diseases: We cannot anticipate the movement of pathogens from animals to humans if we don’t know what’s in the animals to start with. That’s the argument behind the “One Health” movement, which has been arguing for several years now for including veterinary concerns in human health planning. (The human health side would probably say that the animal health side just wants more money. This is also true, which does not make it unimportant.)

To understand the need to look at animal health in order to forecast threats to human health, you can’t do better than the map I’ve inserted above (because Blogger, annoyingly, won’t let me put it below). It has appeared in various forms in various publications for about 10 years but originates I think from the IOM’s Emerging and Reemerging Diseases report in the early 90s. (This iteration comes from the One Health Initiative website.) It depicts the movement of new diseases from animals to humans over about 30 years. It’s up-to-date through SARS and through the 2003-05 movement of H5N1 avian flu around the world. I’m sure H1N1 will be added soon. How many of those outbreaks could we have shortcircuited if we had been warned of their threat in good time?