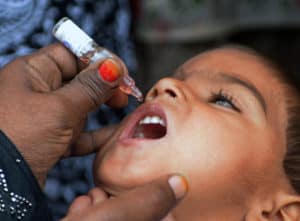 A Pakistani health worker administers polio drops to a child during a polio vaccination campaign in Karachi on January 20, 2015. Pakistan is one of only three countries where polio remains endemic. Attempts to stamp it out have been badly hit by opposition from militants and attacks on immunisation teams that have claimed 68 lives since December 2012. AFP PHOTO / Rizwan TABASSUM (Photo credit should read RIZWAN TABASSUM/AFP/Getty Images)