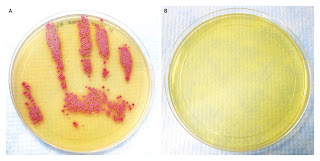 Contant reader Robyn pointed out an amazing image in the New England Journal of Medicine issue I discussed below. I missed it (thanks, Robyn!), so I went back and retrieved it. Here’s what you’re looking at:

The Cleveland Veterans Affairs Medical Center discovered via a routine nasal swab that a quadriplegic patient was colonized with MRSA; the patient had not had any signs that would have indicated an infection. To satisfy their curiosity over how much MRSA a healthcare worker might pick up from a patient whom they did not know was colonized, they had a health care worker do an abdominal exam of the patient — let’s underline that: abdominal; nowhere near his nose. Then they pressed the worker’s hand onto a growth medium that had been tuned with antibiotics so that it would allow MRSA to grow but suppress other bacteria.

That’s what you’re looking at above. All of that red is MRSA. The image on the right is what grew after the same worker did hand-sanitizing with alcohol foam and then pressed the same hand onto an identical culture plate. What’s growing? Nothing at all.

Here’s the back story, quoted from NEJM (re-paragraphed):

A 24-year-old man who had quadriplegia due to a traumatic spinal cord injury was found on routine surveillance cultures to have methicillin-resistant Staphylococcus aureus (MRSA) colonization of his anterior nares. He had no history of MRSA infection or colonization.
To assess the potential implications of the patient’s MRSA carriage for infection control, an imprint of a health care worker’s ungloved hand was obtained for culture after the worker had performed an abdominal examination of the patient. The MRSA colonies grown from this handprint on the plate (CHROMagar Staph aureus), which contained 6 µg of cefoxitin per milliliter to inhibit methicillin-susceptible S. aureus, are pink and show the outline of the worker’s fingers and thumb (Panel A).
With the use of a polymerase-chain-reaction assay, the mecA gene, which confers methicillin resistance, was amplified from nares and imprint isolates. After the worker’s hand had been cleaned with alcohol foam, another hand imprint was obtained, and the resulting culture was negative for MRSA (Panel B).
These images illustrate the critical importance of hand hygiene in caring for patients, including those not known to carry antibiotic-resistant pathogens.

UPDATE: The tireless and too-seldom-thanked crew at ZoneGrippeAviare, who provide pandemic news for the Francophone community, have translated this post into French. Mes mercis respectueuses!