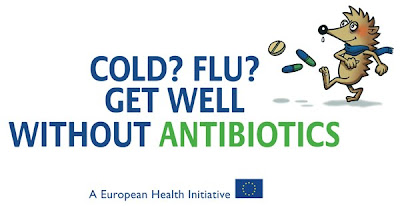 UK and EU readers can hug themselves with self-congratulation this morning (OK, admittedly, for you it’s afternoon already): It’s Antibiotic Awareness Day across the European Union, featuring a slate of public-awareness activities, public-service announcements, educational efforts, and random appearances by the charming little hedgehog above (kicking antibiotics, don’t you see). It’s all meant to convince people that antibiotics are a precious resource and that misusing them encourages antibiotic resistance.

The campaign is organized by the European Centre for Disease Prevention and Control (the EU equivalent of the US CDC) and is being carried out by an enviably long list of national agencies within the EU. It’s accompanied by the publication in the journal Eurosurveillance of an article setting out the challenges of controlling antibiotic resistance across such diverse nationalities and geographies.

There are materials on the site that would be useful for anyone attempting to get the message of antibiotic stewardship across to physicians, family members or friends: There’s a fact sheet for the general public, one for physicians and other experts, and one that specifically addresses the temptation to take antibiotics in cases of H1N1 flu.

There’s also a short film explaining the genesis of Antibiotic Awareness Day and the basics of antibiotic resistance, and a marvelous set of pull-no-punches short video spots. This one — comparing antibiotics to a lightbulb slowly burning out — is my favorite.