The background here: For decades, scientists have been demonstrating that antibiotics used in raising meat animals pose a health threat to humans, because the antibiotics cause bacteria in the animals’ systems to become resistant. When the animals are slaughtered and turned into meat, the resistant bacteria remains on the meat; the bacteria may be consumed directly, or may contaminate kitchens — or may contribute resistance DNA into the environment that then is sucked up by other bacteria.

The concern is acute because so many of the antibiotics that are used in meat production are functionally identical to the same drugs that would be used to treat bacterial infections in human medicine. That means that, because of agricultural use, human-use drugs are ineffective when they are needed. What adds to the problem is that agriculture uses so many antibiotics: three to four times what is used in humans in the US each year.

Antibiotics are used in meat production in three ways: to treat illness in a flock or herd; to prevent illness that might occur; and to cause animals to put on weight faster, or get to market weight with less feed. That last category is called “growth promotion” (and sometimes “feed efficiency”); it consists of animals being given tiny doses of antibiotics, literally grams per ton, in their feed, and sometimes in their drinking water. The FDA attempted to control growth promotion back in the 1970s, about 25 years after it granted licenses for several antibiotics to be used that way, but was forestalled for decades by Congressional interference. (The European Union banned growth promotion entirely in 2006.)

Since the FDA was never able to obtain a legal or regulatory ban here, it decided three years ago to follow a different path, and ask ag-antibiotics makers to participate in a voluntary program of changing their drugs’ labelling in such a way that growth-promotion would no longer be a permitted use. (Past posts on this: here, here, and here.) Many drug makers signed on.

But: The FDA voluntary program only affects growth promotion; it does not cover that middle category of use for disease prevention. And among experts on the issue, there has been a lot of concern that growth-promotion use could simply be redefined as disease prevention, meaning that the amount of drugs being used, and causing resistance, would never really go down.

This new Pew analysis suggests that may in fact take place. The organization’s Campaign on Human Health and Industrial Farming examined the label restrictions for every one of the 287 antibiotics now used in meat production, to see whether growth-promotion and preventive doses were significantly different, or so similar that the drugs could go on being used unchanged.

Here’s what they found: Out of the 287, half — 144 — have no overlap; so growth-promotion with them really should cease under the new rules. And 34, or 12 percent, have been taken off the market completely. But the labelling of the remainder raises real questions whether their use will change:

Summing that up: If this analysis is correct, then one-fourth of the drugs that the FDA says its policy will take out of use, can actually continue being used, under an FDA-approved label. Which raises real questions about how well the FDA policy for controlling the emergence of antibiotic resistance is going to work.

(Edited to add:) Further, the analysis says that the 66 formulas that could slide out from under the ban are important in human medicine and therefore crucial to protect: ” FDA classifies 29 of these 66 antibiotics as critically important in human medicine, and 37 as highly important.” Those terms indicate categories drawn by the World Health Organization (contained in this report here) that divide antibiotics into ones that we might be able to lose, or reduce using, and ones that are irreplaceable and must be protected as-is.

Here’s a graphical representation of the Pew analysis, drawn from their issue brief here. 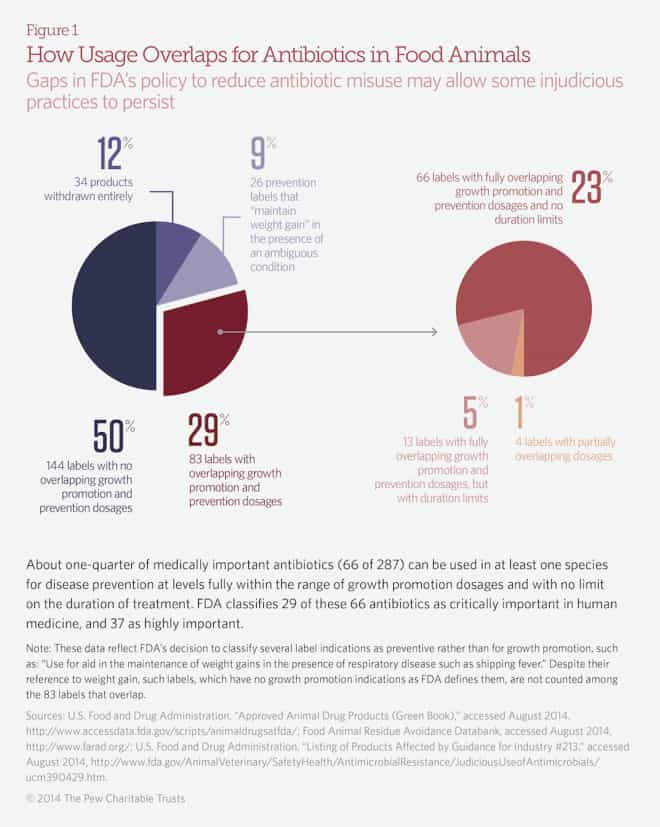