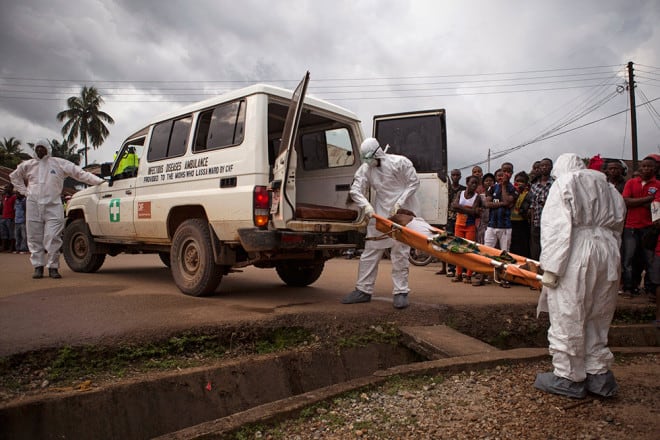 Healthcare workers load a man suspected of suffering from the Ebola virus onto an ambulance in Kenema, Sierra Leone, on Sept. 25, 2014.

If you listened hard over the weekend to the chatter around the political theater of detaining a nurse returning from the Ebola zone in a tent with no heat or running water, you might have heard a larger concern expressed. It was this: What happens if this kind of punitive detention — which went far beyond what medical authorities recommend — deters aid workers from going to West Africa to help?

As a reminder, the African Ebola epidemic is still roaring in three countries; two others have contained the disease, but it has now leaked to a sixth, Mali. The case count is 10,141, with 4,922 deaths. Last month, the Centers for Disease Control and Prevention estimated that if the epidemic continued on its current course, cases would hit 1.4 million by next January. Last week, Yale researchers said in the journal Lancet Infectious Diseases that even current promises of international aid will not contain the epidemic — so the volunteering of medical personnel such as that nurse becomes even more important.

But what if, because of this weekend’s events, volunteers are discouraged from going to West Africa, for fear of how they will be received on return? Or what if they do go, and their efforts are still not enough?

I wanted to be sure I wasn’t over-imagining what might happen next with Ebola, if it is not contained at its source now. For a fact-check, I turned to Jody Lanard and Peter Sandman, two risk-communication experts who have been involved in most of the big epidemic threats of the past decades. (I met them, I think, in the first run-up of concern over H5N1 avian flu in 2003.)

I hoped they would tell me not to be too worried about Ebola becoming a permanent threat in West Africa. Instead, they told me to be very worried indeed.

Lanard and Sandman wrote an entire essay in response to my query to them, and they have put it up on their website (which is worth visiting as a deep resource of reasonable thinking about how to approach infectious disease). They call our refusal to engage with the depth of the epidemic in Africa, and its possible consequences for the world, “Failures of Imagination.”

Here are some things they say:

Some of the world’s top Ebola experts say they are worrying night and day about the possibility of endemic Ebola, a situation in which Ebola will continue to spread, and then presumably wax and wane repeatedly, in West Africa…

Fewer experts refer publicly to what we think must frighten them even more (and certainly frightens us even more): the prospect of Ebola sparks landing and catching unnoticed in slums like Dharavi in Mumbai or Orangi Town in Karachi – or perhaps Makoko in Lagos.

They point out that Ebola coming to the US is, comparatively, not that great a concern:

The two of us are far less worried about sparks landing in Chicago or London than in Mumbai or Karachi. We wish Dallas had served as a teachable moment for what may be looming elsewhere in the world, instead of inspiring knee-jerk over-reassurance theater about our domestic ability to extinguish whatever Ebola sparks come our way…

Americans are having a failure of imagination – failing to imagine that the most serious Ebola threat to our country is not in Dallas, not in our country, not even on our borders. It is on the borders of other countries that lack our ability to extinguish sparks.

They address how unlikely it is that Ebola will be contained using the current level of aid and personnel. Here. they say, is what would have to happen for the disease to be stopped:

If none of those happen, they predict, this is what will happen instead. Ebola will become endemic: a permanent health risk, waxing and waning unpredictably, in an area without the health care personnel to control it or the surveillance to track it. They envision:

It is not guaranteed, they say, that a successful vaccine against Ebola can be “developed, produced, and distributed” in time, and in large enough amounts, to throw a fence of containment around the disease.

If not, they warn, it is possible that the rest of the world’s reaction could trigger the next global financial crisis.

Being someone who has a professional specialty of covering epidemics (HIV, the anthrax attacks, SARS, H5N1, H1N1, lots of smaller outbreaks), I reluctantly have to conclude: Lanard and Sandman are not being alarmist here. Imagine that Ebola cannot be contained; think back to the events of this weekend; and then imagine that reaction multiplied thousands of times. It isn’t a big leap to the suspicion, disruption and expense that will then be triggered in response to any travelers from the region. From there, it isn’t much of a further leap to closed borders, curbs on  international movement, disruption in global trade, cuts in productivity, even civil unrest and the opportunities that unrest offers to extremist movements. None of that is far-fetched, if Ebola is not controlled.

The most alarming thing in Lanard and Sandman’s essay isn’t that they envision these results might happen. It is that they fear it may already be too late. They note:

We have been here before. When it looked to many experts (and to us) like H5N1 avian influenza was about to go pandemic, we both had a similar sense of dread.

This time feels different to Jody, like it is already inexorably happening. To Peter, it’s a scenario likely enough to worry about, to lose sleep over, and to take drastic action to prevent or mitigate – but it doesn’t feel necessarily inevitable … not yet, anyway.

They conclude with some recommendations on how to talk about Ebola going forward so that people don’t freeze in panic, and what is at risk in public trust if no one undertakes the difficult task of beginning that conversation.

The entire essay is very worth reading. Here again is the link: