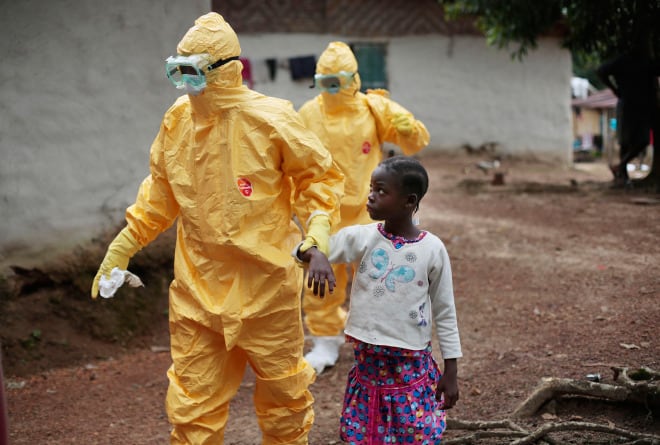 Nine-year-old Nowa Paye is taken to an ambulance after showing signs of the Ebola infection in the village of Freeman Reserve, about 30 miles north of Monrovia, Liberia.

We’ve pretty much signed off on Ebola in the United States — last week, President Obama withdrew the US troops sent to fight the disease — but in Africa, the news on the epidemic has seemed pretty good. The overall number of known cases stands at 22,894, with 9,177 deaths, far below the dire predictions made last fall that the epidemic could sicken millions.

Progress at beating the disease is stalling, though. According to the World Health Organization, the number of new cases has gone back up for two weeks in a row. Sierra Leone, now the outbreak’s epicenter, still has what the WHO calls “widespread transmission,” and on Saturday its government quarantined part of the capital. Guinea has had a spike in cases, and in several areas, mobs have attacked clinics.

The news is best from Liberia, where there were just three new cases last week compared to 65 in Guinea and 76 in Sierra Leone. Liberia was hard-hit, with 8,881 confirmed cases and 3,826 deaths — 300 cases per week at some points. But it also seems to have done the most to curb the disease’s spread: Today, schools that had been closed since last fall are supposed to open again.

Last week, though, I had the opportunity to speak to a front-line Ebola fighter in Liberia, and what he told me underlined how precarious that country’s progress is. 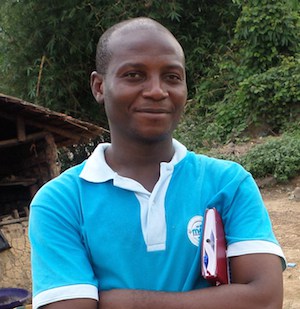 F. Zeela Zaizay is a registered nurse and the Liberian team leader for MAP International, a Christian medical-assistance nonprofit. MAP, which is based in Atlanta, has sent $1.7 million’ worth of supplies such as “no touch” infrared thermometers and protective equipment for health workers, and helped organize Ebola-education efforts in townships and on local radio.

“We are having an average now of less than one case per day,” he told me in a Skype call from Monrovia, Liberia’s capital. “That shows we have made tremendous gains in the fight against Ebola. But the practices that led to the gains we are having are being abandoned just as the cases are declining too, so it brings about fear. If we are not careful we could have more cases again.”

I asked him what practices he meant, and he told me about the difficulty in persuading people to relinquish treasured funeral rituals: washing and dressing a body, touching and kissing the corpse, and burying it near where the family lives.

“One of the practices we have is bathing and grooming the dead, and one of the ways we do honor to them is to dispose of them in their home town or village,” Zaizay said. “It is easy to say, do not touch the dead, do not touch the sick — but if you have a dead family member that you so much honored, you could be tempted to design a strategy to take the person back to where they were from.”

Under the anti-infection practices promoted by the WHO, the bodies of people who died of Ebola are bagged and buried in special cemeteries, or cremated. In the past two months, Zaizay said, two outbreaks in adjoining counties were sparked by people who objected to that treatment and retrieved the corpses of loved ones from an Ebola treatment unit and transported them home for burial — in one case, dressing the corpse in clothing and propping it up in the seat of a car.

The spread of Ebola back into communities is difficult to handle, Zaizay added, because some of the townships in Liberia are so lacking in resources and so remote. “Prior to Ebola, many communities had a problem with safe drinking water, because they use surface water — rivers, creeks — for drinking and for bathing,” he explained. “So there is sewage, and also the water is very turbid from run off.” Yet getting clean water into remote areas is difficult: “Some places, the roads are too bad to drive, and to reach them, we have to go by canoe.” In one remote area, he said, 500-ml bottles of water cost three times what they do in the capital.

I asked about the flow of supplies into the country, and Zaizay mentioned problems that also surfaced in reports last month: the Liberian economy, already dented by years of civil war, has been undermined by the retreat of foreign businesses and the slowdown in everyday commerce and farming. The first-line recommendation for preventing Ebola is washing in water spiked with bleach after any person-to-person contact, “but many people in Liberia cannot afford to buy chlorine (bleach),” he said. “Many persons are out of jobs, and with the interruption of the farming season, there is economic hardship in the countryside too.”

There are price hikes as well in the cost of protective equipment — gloves, face masks — for health care workers, he said: “Every health care worker in Liberia now is very sensitive to the use of personal protective equipment (“PPE”) and to not putting themselves in harm’s way. Comparing the daily consumption of PPE and versus the influx into the country, there is a huge demand.” The equipment is not only being used in Ebola wards, he added, but in maternity wards and in surgery, so there is competition within health care for where the supplies will go. Given the shortages, he said, health workers are tempted to re-use gloves and masks, even though they know it is a risk.

I asked Zaizay what he thought Liberia needed most to combat the disease, thinking he would say more gloves and bleach to start. Instead, at the top of his list he put “high quality medications” for diseases other than Ebola. “A third of our health care offices are now just conducting triage for Ebola,” he said. Patients with other diseases, such as leprosy and the bacterial disease Buruli ulcer, are afraid to come to those clinics. “If we could take them medications,” he observed, “they would not have to risk contact with sick people and the burden of disease would be less.”

After that, his list included bleach and protective equipment, and also structural help: well-digging to improve clean water supplies, and connectivity to shore up the poor Internet access that keeps Ebola cases from being reported.

“We are calling out to everyone to support us,” he said. “Support us with chlorine, with medications, with resources. We have proven we have the capability and the strategies and the bravery to fight Ebola. But it is too early for us to say we have beaten Ebola. We have only shown that, if we get the support, we can.”

For more on the Ebola efforts at MAP International, go here.
This NPR post describes the challenge of adapting burial practices in Liberia, and this book by the first anthropologists invited to join a WHO Ebola mission describes encountering the problem during earlier outbreaks.
In this post, a staff member at the Centers for Disease Control and Prevention describes the difficulty of getting to a remote Liberian town.