So, to quickly recap: What the FDA did on Dec. 11 was to announce the final version of its “Guidance for Industry 213,” a long-awaited document that lays out how the agency expects the livestock industry to phase out the small doses of antibiotics that are used day-to-day on meat animals either to grow faster than they would otherwise, or to grow to market weights using less food than they would otherwise need. Crucially, the Guidance is actually directed at the manufacturers of veterinary pharmaceuticals, asking them to remove from their antibiotics the “label indications” that the drugs can be used for growth promotion.

But the Guidance, which is voluntary, does not put equivalent restrictions on the remaining uses of antibiotics in meat production, disease prevention and disease treatment. So the concern in the wake of the Guidance is that the antibiotics now being used will simply be redefined into a category not covered by the Guidance, and that overall use will not change. A list of research and nonprofit groups raised these concerns at the time, and their comments are worth checking out. (There’s a curated list at the end of my Dec. 11 post.)

Will the industry comply? Reports on whether it intends to do so are mixed. For instance, the Animal Health Institute, which represents the major veterinary-pharma manufacturers, said on Dec. 11 that its members intend to follow the guidance and, by the end of its 3-year phase-in, be using antibiotics “only for therapeutic, or targeted, purposes.” On the other hand, Dr. Richard Carnevale, a veterinarian and vice-president of the AHI, told Ralph Loglisci (in a very good piece at Civil Eats): “We don’t have any real way to know whether this is going to impact total use, because there are so many factors that are involved with antibiotic use.”

The important point here, somewhat lost in the focus on growth promoters, is that antibiotics are not used only to fatten animals; they also are administered to protect animals from the conditions in which they are raised, which are marked by crowding, lack of cleanliness, lack of ventilation. Antibiotics keep the diseases caused by those conditions in check.

Continued use of those antibiotics creates resistant bacteria that move off farms to threaten human health — so those concerned about human health want their use reduced. But continued use also protects animals from disease and suffering — and if they are removed or reduced without those conditions being changed, the animals’ welfare is likely to be worse. It’s a conundrum.

(NB: Antibiotics are also used for straight-ahead disease treatment when illness has been identified in an animal, flock or herd. No one disagrees with that, or has asked for it to be reduced. Sick animals deserve to be treated.)

The FDA is both acknowledging there is a problem and shirking its responsibility to solve it. By allowing industry to choose for itself whether to feed farm animals daily drugs, the FDA is helping to prop up cruel factory farms where conditions are so bad animals will often die if they are not constantly dosed with antibiotics. These routinely used drugs are relied upon to ameliorate the effects of systemic and widespread welfare problems that industry itself has created.

For more detail on this, it is worth drilling into the fact sheets (with references) compiled by the Humane Society of the United States, and especially into a pair of reports done by the Center for a Livable Future at Johns Hopkins University with the support of the Pew Charitable Trusts under the banner “Industrial Food Animal Production in America.” The first report, issued in 2008, was ground-breaking for the way in which it drew together the strands of public health, environmental health, rural community and animal welfare concerns to present a comprehensive case for changing meat production. This fall, the Center did a 5-year update, examining whether things had moved forward at all, and concluded that though evidence for the harms of high-density meat production was stronger than ever, policies addressing those harms had not changed.

The object lesson in changing antibiotic patterns is Denmark, which in 2000 made farm antibiotics prescription-only, and banned nontherapeutic uses altogether. It’s often pointed out, on the ag side, that Denmark had an increase in deaths among weaner pigs immediately after that ban was rolled out; but within 3 years, weaner pig survival improved and returned to where it had been before the ban. 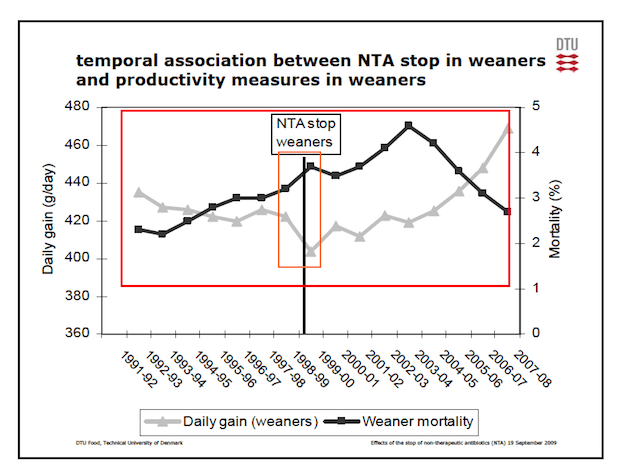 What reversed the trend was Danish farmers’ understanding that it wasn’t enough just to remove antibiotics from meat production. What was necessary was to change the conditions in which meat animals were raised, so that the welfare threats which the antibiotics had addressed no longer existed.

That seems to me to be the lesson that meat production in America needs to learn, if the FDA’s intention to remove growth promoters is going to be meaningful. Simply reducing antibiotic use (if that does indeed happen) isn’t adequate; by itself, it may even be a threat to welfare. Changing the livestock practices that made antibiotic use necessary will improve animal and human health both.