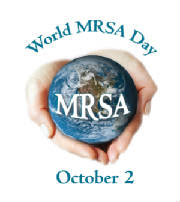 I want to introduce you all to a MRSA campaigner, Jeanine Thomas of Chicago. Jeanine — whose story will be told in SUPERBUG — is the founder of World MRSA Day, a worldwide event of activism and grieving that will take place Friday, Oct. 2. There will be simultaneous observances in the UK, and a candlelight vigil in Salt Lake City that evening.

Tomorrow, Oct. 1, Jeanine will be at Loyola University in Chicago to lead a press conference, commemoration for MRSA victims, and award ceremony for notable MRSA campaigners, and to urge those harmed by MRSA to observe October as MRSA Awareness Month.

In advance of the observances, I asked Jeanine to talk to SUPERBUG about her experience and her activism.

Tell us about your personal experience with MRSA.
I was infected with MRSA after ankle surgery in 2000. I came back to the ER — my incisions were black and oozing a large amount of pus and I was in teribble pain — and was admitted. Three days later my culture came back positive for MRSA. I was not put on the right antibiotic; the infection went into my bloodstream and bone marrow and I went into septic shock and multiple organ failure in the middle of the night. The night nurses were able to pull me back and save me. I had seven more surgeries to save my leg from amputation, spent a month in the hospital, and then was confined to bed on a cocktail of antibiotics for 5 more months. I also contracted C. difficile. I now have a destroyed ankle joint and a severely compromised immune system.

You started a MRSA patients’ group. Tell us about the group and why you did that.
I started MRSA Survivors Network in 2003 to give support, raise awareness and educate others. There was so little out there about this disease. I never wanted anyone else to go through what I had.

You used your experience with MRSA to help pass patients-rights legislation in Illinois. Please talk a little about the bill.
In 2003, I helped push the “Hospital Report Card Act” that then-state senator Obama introduced, to have infection rates reported. As the consumer representative on the state board for the HRCA, I saw that state health officials and doctors did not even want to have MRSA reported as a disease. So I decided I must take action and in 2006 we introduced the “MRSA Screening and Reporting Act.” It passed in 2007, the first in the country, and mandated that all ICU and other at-risk patients be screened for MRSA and infection rates reported. Since then, the Illinois Hospital Association has reported that inpatient infection rates have dropped, but they see many more CA-MRSA cases because of the screening.

How and why did you come up with the idea for World MRSA Day?
In January of 2009 I was thinking of ways to raise awareness and the idea of launching World MRSA Day and a MRSA Awareness Month popped into my head. There are awareness days for every other diisease and as MRSA is pandemic, we need global awareness. I did not know how successful I could be the first year during a recession, but the response was surprising, and I was able to launch the campaigns.

Tell us what you hope will change in the aftermath of having had this worldwide event.
I hope that awareness of MRSA as an epidemic in the US and a pandemic sweeping the globe will be revealed, and that action from the World Health Organization, Department of Health and Human Services, the CDC, governments and health departments will happen. I want all of them to declare MRSA an epidemic. This should have happened years ago, but let’s move forward now. Their inaction has caused this disease to proliferate. I also want the public to be aware of MRSA as we are all in this together and every single person on this planet is at risk. Prevention is key to saving lives.