From Bird Flu to Big Farms: The Rise of China's Agriculture

The nonprofit is the Institute for Agriculture and Trade Policy, based in Minneapolis. On Wednesday, it released four linked reports on the transformation of livestock-raising in China:

Here’s an excerpt from the press release that accompanied the reports’ publication:

China is the world’s largest producer of pork, the second largest producer of poultry, the largest feed importer and the fourth largest dairy producer. IATP’s reports analyze the global implications for policy decisions at this scale as well as domestic impacts on China’s food supply and economy as small producers can no longer compete with corporate livestock operations.

If you’ve been reading this blog for a while, you’ll understand immediately that the rise of China as an agricultural powerhouse — eager not only to feed its increasingly well-off populace, but to transform itself from an importer to an exporter — has all sorts of resonances. Bird flu is far from the only problem. China uses antibiotics in agriculture in much the same manner the United States does — and has the same problems of antibiotic-resistant bacteria leaking from large-scale farms. (It also has attempted to control its farm-antibiotic use, but the jury is out as to whether it will succeed.) It has notoriously poor food safety — and has provoked alarm in the US by obtaining a waiver from “country of origin” labeling for meat products. And as the superb food-policy writers Tom Philpott and Twilight Greenaway have written, China’s rising-economy appetite for more meat is fueling a boom in big hog farms in the Midwest, and boosting US soybean production (for animal feed) as well. 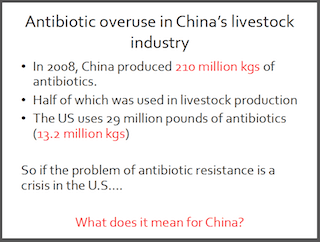 As a result, and as IATP experts said in a webinar Wednesday (archived and available for free here along with an earlier webinar on China’s animal-feed policies), the country’s move to boost its meat sector has critical implications for antibiotic resistance, water shortages and land-use challenges as well as for disruption in global meat markets. Here’s one slide from the webinar (part of a presentation by Shefali Sharma, IATP’s director of agricultural commodities and globalization). You’ll understand why it caught my eye: China is already using almost 8 times the farm antibiotics that the US does, and as IATP predicts in its series of reports, China plans for its farming sector to grow enormously.

The last webinar in the series takes place Feb. 25, and will deal with one of the knottiest problems in China’s food production. It’s titled, “From Melamine to Dead Pigs to Bird Flu: Can Food Safety become a Game Changer Against Industrializing Meat Production in China?” You can see more, and sign up (again, for free) here.

While you’re on the site, it’s worth looking up IATP’s prescient 2011 report, “Feeding China’s Pigs,” and its analyses of the 2013 deal in which China’s largest meat producer, Shanghui, acquired Smithfield, the largest pork processor in the US.