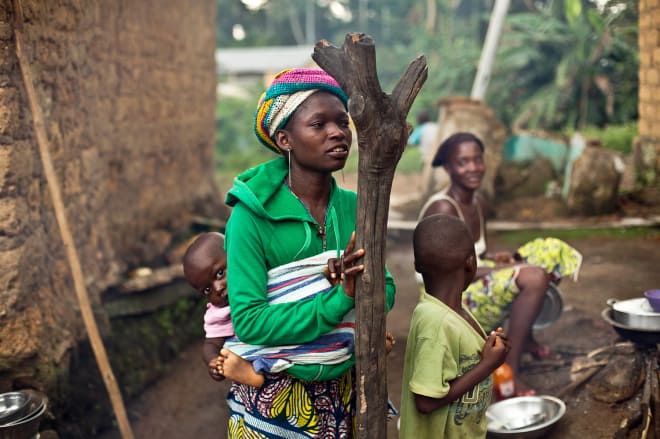 Women gather in the Guinean village of Meliandou, believed to be Ebola’s ground zero.

Awareness of Ebola is picking up again in the United States: An American volunteer who was working in Sierra Leone has contracted Ebola and been medevac’d to the National Institutes of Health Clinical Center for Ebola treatment, and 10 more volunteers have been brought back to NIH, Omaha and Atlanta, to be examined at three of the four institutions in the US that have safe units to house them.

It’s a reminder that Ebola still persists in West Africa: In the last period the World Health Organization reported on (the 7 days ending March 8), there were 116 new cases. One bit of good news: None of them were in Liberia, for the second week in a row. But Guinea and Sierra Leone, where this volunteer was infected, continue to struggle.

And in a research paper published as that volunteer was being flown back, there’s a reminder that the Ebola outbreak is creating layers of health risks for those countries. In Science , researchers from NIH and four universities warn that Ebola’s interruption of other health services, such as childhood immunizations, threatens to create secondary epidemics of preventable diseases that would dwarf Ebola’s impact. In particular, they warn that there could be 100,000 additional measles cases, and up to 16,000 additional deaths, if health services are not restored.

END_OF_DOCUMENT_TOKEN_TO_BE_REPLACED

Every once in a while, there’s news of a measles outbreak. On the surface, they don’t involve large numbers of cases — there’s one in Minneapolis right now that has racked up 21 cases so far — and so people seem to wonder why these outbreaks are such a big deal.

Here’s one reason why: Measles transmission within the US stopped in 2000 because of vaccination. Outbreaks here start with an importation from somewhere else where the disease still flourishes — but they gain a foothold because lack of vaccination, primarily from vaccine refusal, lets the disease get past what should be an impregnable barrier of herd immunity to attack those who are too young to be vaccinated or whose immunity has faded.

Here’s another reason: Stopping the measles virus before it can cause serious disease — and by “serious,” I mean deafness, pneumonia, encephalitis and miscarriage — is incredibly costly and labor-intensive. An account published overnight in the Journal of Infectious Diseases gives a glimpse at just how costly. To stop a 14-person outbreak that began with one unvaccinated tourist visiting a US emergency room, the Arizona Department of Health had to track down and interview 8,321 people; seven Tucson hospitals had to furlough staff members for a combined 15,120 work-hours; and two hospitals where patients were admitted spent $799,136 to contain the disease.