The Poultry Industry Responds to an Activist Farmer 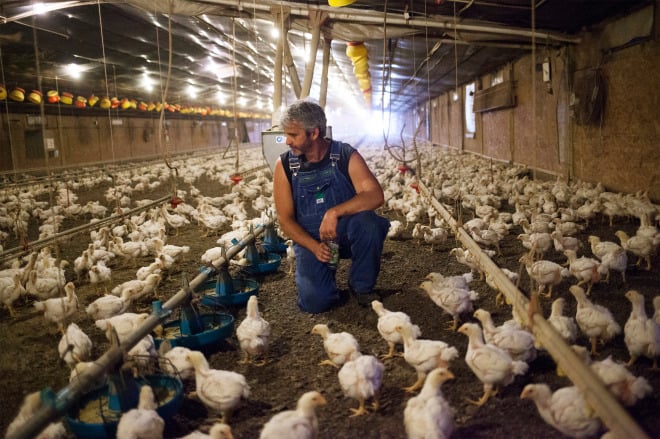 Last week I broke the story that contract chicken farmer Craig Watts, who had let animal-welfare activists film in the barns where he raises poultry for Perdue Farms, filed for whistleblower protection against the company because he felt retaliated against. In his complaint — made to the Department of Labor under the provisions of the Food Safety Modernization Act — Watts said that the condition of the chicks Perdue delivered to him compelled him to raise “adulterated or misbranded food” for consumers, and that when he attempted to reveal this, the company harassed him with inspectors’ visits.

When I posted on Watts’ complaint, which has the form of a lawsuit though it is filed with a federal agency not a court, I said I’d update once I got reaction from the company or the industry. I’ve received their reactions now and, since it’s been a few days, it seems more fair to break them out in a separate post, rather than adding to last week’s.

Short version, with details below: Perdue and the National Chicken Council both say that Watts — who has not lost his contract with the company — is not being retaliated against, but needs guidance to do a better job raising the chickens he is sent.

(A bit of background, in case poultry production is new territory for you: Chicken raising has a unique business structure. The parent companies — Perdue, Tyson, Pilgrim’s Pride, and so on — own the birds, the feed, the packing houses, and the distribution networks. Farmers, who own their barns, sign contracts to receive chicks from a company; they raise those chicks for 5 to 6 weeks, and then surrender them back to the company for slaughter. The weight and condition of the birds determines how much the farmer gets paid. In pure economic terms, it is a very clever system, because the entity with the most resources, the corporation, takes on the least amount of risk — while the farmer, who does not choose the birds or the feed, has to answer for the results of their raising. Christopher Leonard’s book The Meat Racket, published last year, delves into this system as it is run by Tyson.)

So, to Watts: In the video shot on his farm, he complained that the birds that are delivered to him are ill and deformed, and that the crowded conditions in which he is required to raise them are unfair to the birds and him. Perdue’s response, first: Julie DeYoung, spokesperson for Perdue, sent me this statement:

While we have not been served with the complaint, we have seen activist groups’ press releases and blog posts, and have been contacted by media who have been pitched to write about it. It is obvious from reviewing the complaint posted online that this is more about publicity than legal action.

We have been more than professional and accommodating to Mr. Watts. Our actions are consistent with our standard procedures for handling contract grower issues and what we feel is necessary to ensure that our chickens are receiving appropriate care. As we told Mr. Watts in writing, “Perdue’s increased attention to your poultry farm during the weeks ahead is not for purposes of retribution, but to ensure that Perdue’s poultry are being properly cared for in an environment that ensures both adequate animal husbandry and animal welfare practices.”

In that same letter, we reminded him that the growing contract allows him to terminate his relationship with us at any time and seek a contract with another poultry company or use his houses for other business purposes. We even offered to waive the 90-day notice he is required to give us under the USDA Grain Inspection, Packers and Stockyards Administration regulations that govern poultry contracts.

As we stated previously, this video does not accurately reflect nor represent our standards for raising poultry, nor is it consistent with what other media representatives have seen. Other Perdue poultry growers have been featured on Maryland Public Television’s Farm & Harvest series and one of our growers gave the filmmakers who produced the documentary Farmland unlimited access to his farm. Reporters from Reuters, Wall Street Journal, New York Times, National Geographic and others have recently visited our growers’ farms. We can only conclude that the conditions shown in the video were staged and/or that the video was selectively shot and edited to tell a negative story.

We are confident this complaint will be quickly resolved in Perdue’s favor and exposed for the publicity ploy that it is. We appreciate the hard work that our hundreds of contract growers provide every day, and regret that Mr. Watts’ actions reflect negatively on them and on the poultry industry.

Second, Tom Super, vice president of communications for the National Chicken Council, sent me this comment by email:

To the best of my knowledge, the company has not retaliated against Mr. Watts at all, quite the opposite in fact; so this filing is puzzling.  It is my understanding that the company has devoted more resources and time to help Mr. Watts raise the best and healthiest birds that he can.  It’s not only ethically, morally the right thing to do, but it’s in the company’s and the farmer’s economic interest to raise the healthiest birds possible.

This filing alleges violations of the employee protection provisions of the FDA’s Food Safety Modernization Act.   First, Mr. Watts is not an employee of the company. Second, meat and poultry products are regulated by USDA, not FDA.   And there are numerous concerns related to the food safety allegations in this filing.

Third: Super pointed me to an analysis of the original video conducted by a panel of animal science academics, convened by the Center for Food Integrity (whose membership is mostly large food production and food-retail companies, and trade associations). The panel members were Patricia Hester, PhD of Purdue University, a poultry scientist; S.F. Bilgili, DVM, PhD of Auburn University, a veterinarian; and Ruth Newberry, PhD of Washington State University, an animal behaviorist. CFI says about the analysis: “The panel operates independently. Its reviews, assessments, recommendations and reports will not be submitted to the poultry industry for review or approval. CFI’s only role is to facilitate the review process and release the panel’s findings.”

The 5-page analysis is critical of Watts’ farming. Some excerpts:

“The farmer needs to implement a twice-daily bird health monitoring program that includes culling and euthanasia of any age chicken that is suffering and in distress… This includes the humane euthanasia of young chicks and older chickens with severe leg problems. It is obvious from the video that the farmer did not implement a rigorous culling program as there were older chickens in the flock that had been retained with severe leg problems. These lame chickens should have been humanely euthanized weeks earlier, yet the farmer allowed them to continue their suffering.”

“Chicks with congenital or development defects, such as a twisted leg or a crossed-beak are expected given the fact that more than nine billion chicks are hatched annually in the U.S. Usually chicks with congenital defects are euthanized at the hatchery and never sent to the farms. Those that are missed or develop an anomaly after placement at the farm are supposed to be humanely euthanized by the farmer. This is an important part of the Animal Welfare Program that the farmer should have been trained on.”

(Regarding the video’s claim that in a house of 30,000 birds, 1,000  or 3.3 percent will die before slaughter age) “This is a correct figure. Average mortality in the U.S. is about 3-4 percent, depending on the bird age. Nobody wants to lose animals, but we have come a long way in improving the health and well-being of broiler chickens.”

Those comments are important, because they suggest that the fundamental clash between the farmer and the company may be a matter, not of performance, but belief. The scientists commenting on his objections — and also the company and the trade association — accept the structure of modern chicken production, in which birds are bred and raised to produce meat quickly and inexpensively. The genetics that result in a percentage of birds dying or having to be killed early are a byproduct of that goal. The scientists’ commentary says that Watts is not performing to the standards of the system. I suspect that Watts would say that the standards no longer accord with his own definitions of husbandry and welfare.

Whether or not to accept the standard conditions of large-scale agriculture — which produces the least expensive meat in the industrialized world — is the central question faced by meat consumers today. Whether Watts wins or loses his suit, or continues to farm for Perdue or goes his own way, that question is unlikely to change.

Here’s the original video in which Watts appeared: